I have had the pleasure of traveling to Mexico City of several occasions, but it was on my last trip in 2017 that I ventured outside of the mega city to a place called Teotihuacán ("teh-oh-tee-wa-KHAN"), an advanced city during its hay-day. Apart from a stop at the Three Cultures Plaza, a place that deserves its own story, most of the day was spent at Teothuacán with the highlight of it being my trek down the Avenue of the Dead and climbing the Moon Pyramid.

Although this experience was three years ago, my memory is as vivid as it was back then. Like many others, the COVID-19 lockdown has facilitated the wandering of minds, virtual experiences and apparently the chronicling of them.

A Snapshot of Teotihuacán

Teotihuacán is an ancient Mesoamerican city located 25 miles northeast of modern-day Mexico City. Human existence in the area dates back to 600 BC, but during the period from 100 BC to AD 750, Teotihuacán had evolved into a huge urban and administrative center with cultural influences throughout the broader Mesoamerica region.

At its peak, sometime in the first half of the first millennium CE, Teotihuacán was the largest city in the pre-Columbian Americas, with a population between 100,000 and 150,000.

The city covered 8 square miles with a large percentage of the population of the Valley of Mexico residing there. The original name of the city is unknown, but the name Teotihuacán (place of the gods) was given to it by the Aztecs centuries after the city fell.

One of the things that characterizes the city of Teotihuacán is the Avenue of the Dead which is flanked by pyramids and other monuments. The avenue is more that a mile long with the Temple of the Feathered Serpent at one end, the Moon Pyramid at the other, and the Sun Pyramid in between.

Our tour-guide set us loose to climb one pyramid of our choice, so I choose the Moon Pyramid as The Sun Pyramid looked quite intimidating. The Moon Pyramid was a bit steep, but I managed to get to the top with some oxygen still in my lungs, keeping in mind that the area is over 7000 feet in altitude. 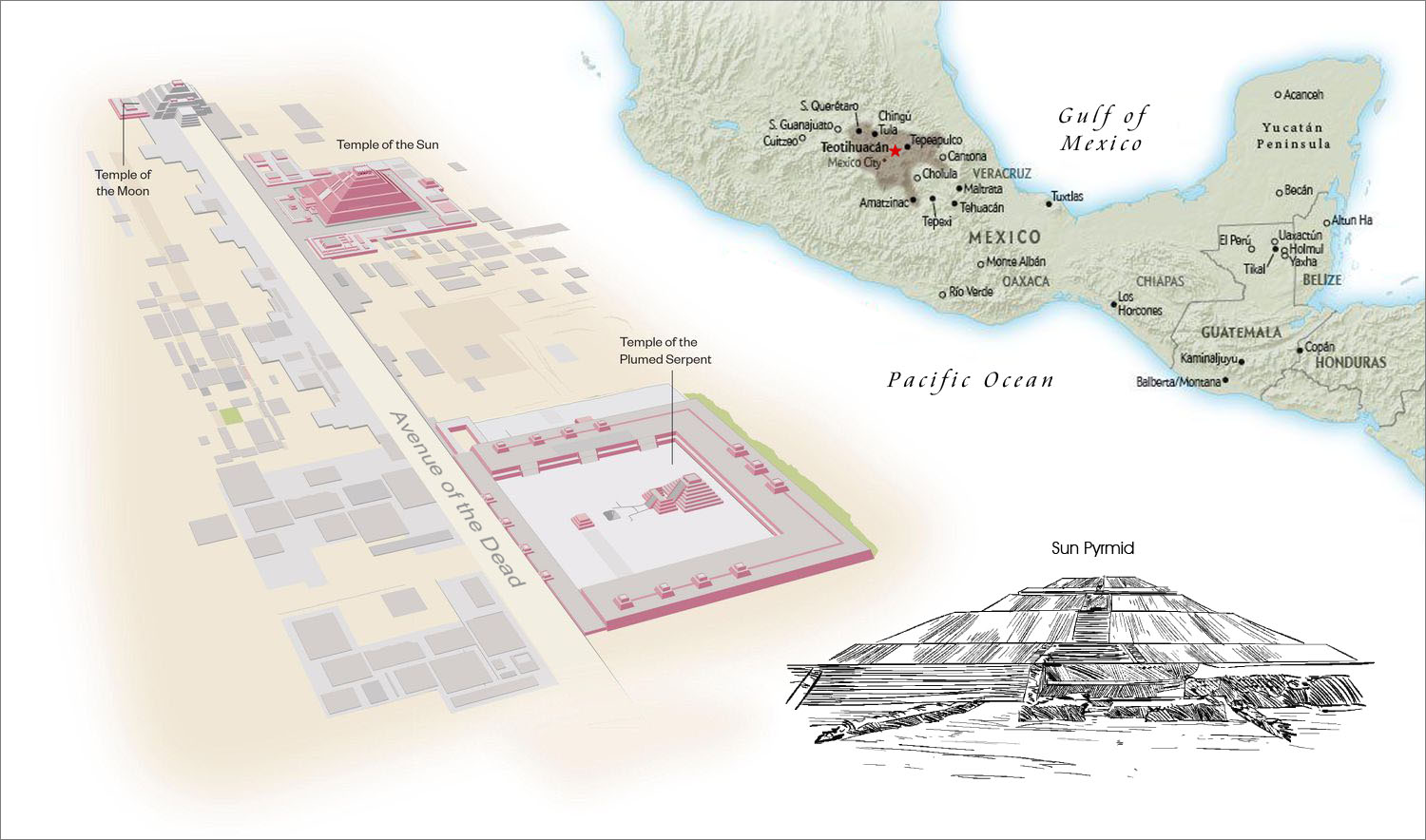 What did I learn?

For starters, it is always good to build in an extra day when traveling on business to see what treasures lie in and around your destination. In the past, I have been flying into a destination on the day prior to a meeting or conference, then leave the morning after it wraps up.

Avenue of the dead. The Avenue of the Dead is lined with smaller pyramids, assumed to be the tombs of gods and great kings.

Telepathy exists. Archaeologists discovered that the pyramids' size, layout and particularly their positions relative to each other almost exactly match those of the three pyramids at Giza in Egypt. These pyramids also have the same layout as the stars in Orion's belt. Even more staggering is that the engineers who were in charge of building the pyramids demonstrated a fundamental understanding of the mathematical constants.

City abandoned. When the Aztecs found the city in the 1400s, it had been abandoned for centuries. Scholars believed that invaders attacked and burned the city in the 7th or 8th century, but later thought that the destruction may have been caused by an internal uprising.

Mystery. Little is known about the first inhabitants' way of life, and even less about why they later abandoned a city that took centuries to build.

Hairless Dogs. There was no specific link established between Teotihuacáno and Xoloitzcuintle (Xolo, Mexican hairless dogs) but I was fortunate to see some of them. Long regarded as guardians and protectors, the indigenous peoples believed that the Xolo would safeguard their homes from evil spirits as well as intruders. 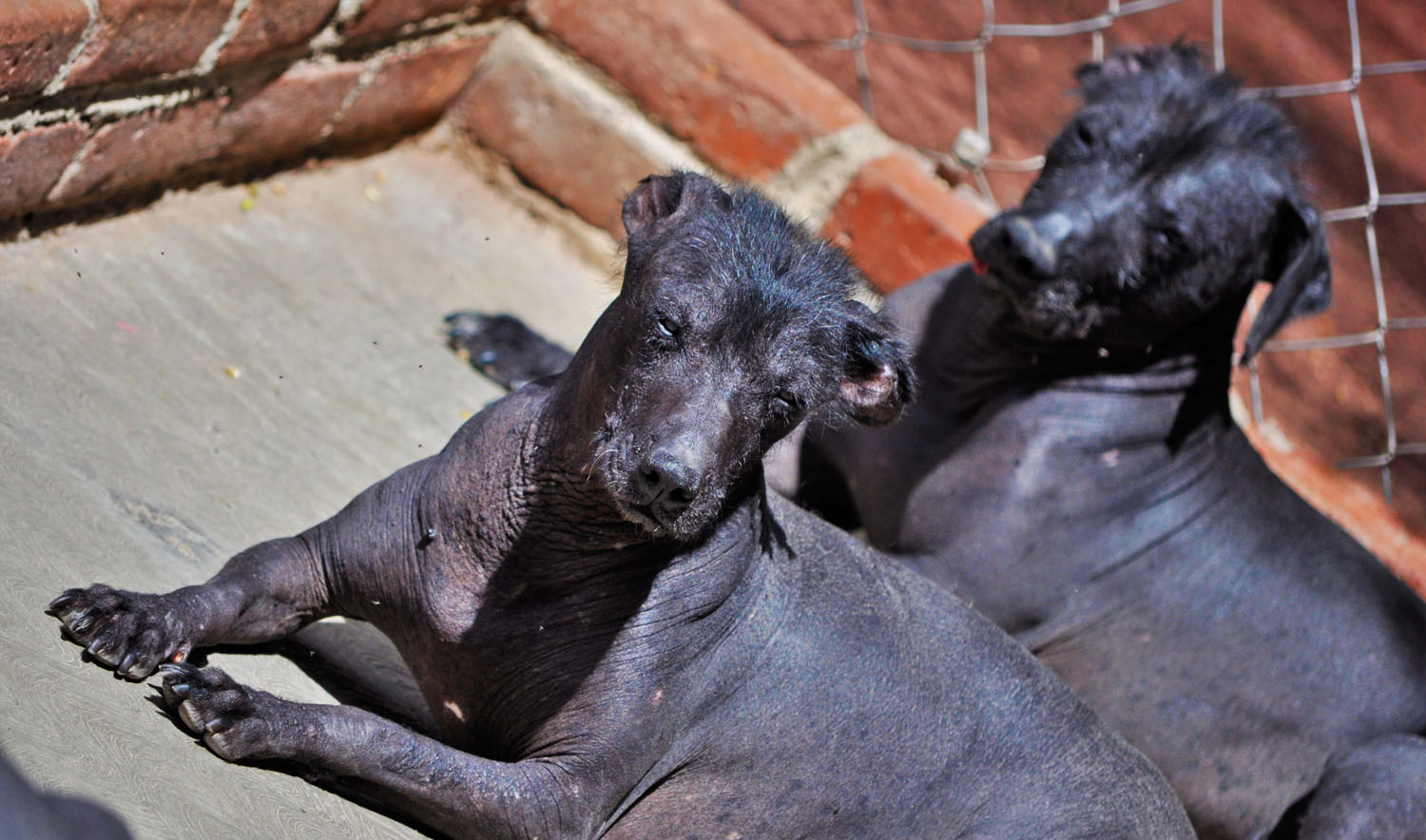 The trip to Teotihuacán felt like an outer-body experience as I relived the life, albeit for a few hours, of one of those early inhabitants walking those sacred grounds.

Like many other places that I visited over the years, the society is steeped in history dating back to times before Christ walked the earth. I am still awestruck by the ability of mankind to undertake mega projects at a time when there were no machines or advanced tools to aid them.

If we allow our minds to wander back to ancient times, we can all be inspired to embark upon projects that are so grand it would scare the living daylight out of you.

My earliest recollection of my favorite pastime as a kid was sketching. I sketched everything from cars, to aeroplanes, to famous people and everything else in between. During high school, I signed up for art classes where I learned to paint.

After graduating from high school, I was first employed by Guyana Airways, then 8 months later by Civil Aviation Department where I become an air traffic controller.

With access to personal computers in the 1990s, the monitor became my new canvas - signaling that start of my website and graphic design journey.